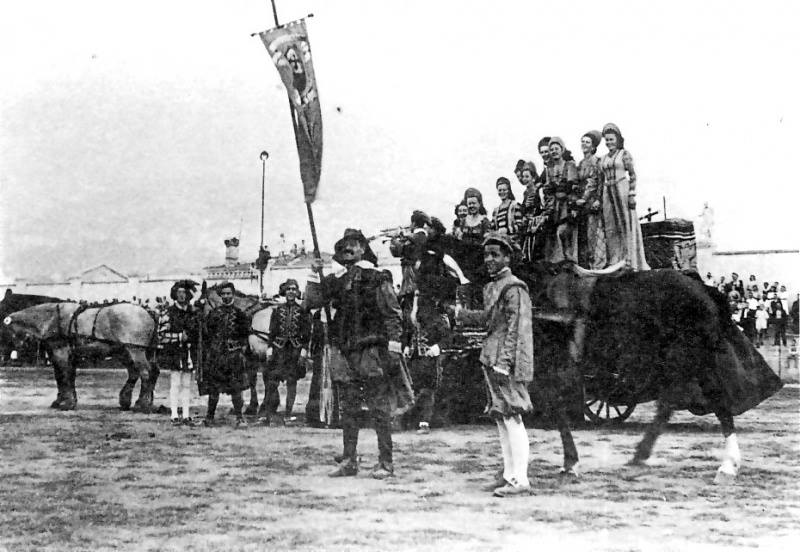 THE RULES OF GIOSTRA FROM 1946 TO 1949
At the beginning of our history, in that distant 1946 that saw the exhumation of the Giostra della Quintana, and at least until 1949 the race track was not as we know it today. No diagonals, but a simple zero-shaped circuit. A kind of equestrian “Indianapolis”, with the statue of the god Mars placed at the central grandstand, more or less where the tribune that houses the timekeepers and the competition jury is now located. A very simplified path compared to today, made for the use and consumption of riders, and it should be pointed out that they were not professional monsters like the jockeys of the third millennium. Yes, we are talking about horse enthusiasts but, in any case, of men who could devote little of their time to this passion. Let us never forget, in fact, that the Foligno of that period was a city prostrated by war, materially and morally devastated, with all its human resources, full-time engaged, each in his area of ​​competence, to rebuild a socio-economic fabric heavily worn. And in this sense, even the first “big names” of the Giostra, from Bartolomeo Gregori to Gianlivio Sorbi, from Alberto Moretti to Aurelio Ravagli or Remigio Cinti, were surely taken by other problems. Another aspect not to be underestimated, compared to a decidedly more archaic reality than the current one, was that linked to the use of the Campo de li Giochi. At the time (and until 1982), this was the playground of the “falchetti”; reason why, all that was out of football, had to interfere as little as possible with the goodness of a turf which, despite the amateur categories in which Foligno Calcio played, was unanimously recognized as one of the best in central Italy, with a plant exceptional drainage. This was the technical context in which the Quintana of the first decade fell. So much competitive spirit, good will to sell but, for the reasons mentioned above, the technical sumptuousness that we now appreciate as a “constant” of the duel, was still a chimera.