In 1946, with the new Giostra della Quintana, the town was conventionally divided into 10 quarters. Each quarter is represented by a knight, therefore all the town dwellers have the possibility to take part in the event. Since 1946 the 10 quarters have been challenging each other for the Palio twice a year and their names reflect some of the seventeen quarters that constituted the town in the period between the XIIIth and the XVIIIth centuries. Their emblems were inspired by some iconographic sources belonging to the late modern age. The 10 quarters take care of all the aspects concerning the public organization of the event, such as the equestrian activity, the taverns, the costumes, the collateral initiatives and the parade. All the organization is based on volunteering. 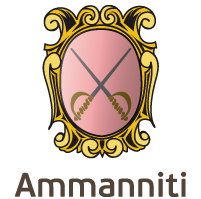 According to oral tradition, although with no historical data, Jacobilli wrote that this quarter derived its name from its inhabitants, as they were supposedly “always ready to fight unitedly in order to defend themselves”; however, Jacobilli found no explanation for the emblem of this quarter. It seems very probable that this quarter derived its name from Latin “ad Mannum”, near San Magno bridge. The emblem used today with two crossed swords on a pink background, outlined during the XVIIIth century, stands for conflict and it is linked to the original name of this quarter, as confirmed by tradition.

Also in this case oral tradition tells that this quarter derived its name and its emblem from an ancient Benedictine abbey that rose near St. Salvator’s Church, or perhaps right in the same place. The current emblem which was outlined in the XIXth century and that portrays a Roman horseman is completely different from the previous iconographic tradition. 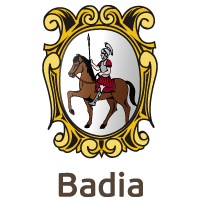 Also in this case the oral tradition tells that the district would derive the name and emblem from an ancient Benedictine abbey, which stood nearby, or perhaps on the same place, where today stands the church of San Salvatore. The current sign of the Roman soldier on horseback, outlined in the nineteenth century, completely breaks with the previous iconographic tradition. 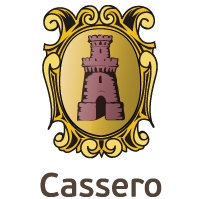 In the Middle Ages, as well as in the modern period, this was not a quarter but simply a contrada (a district) in the quarter named Campo or Fonte del Campo. The emblem is an embattled tower on a yellow background and it refers historically to the so-called Rocca dei Trinci which was built in the contrada at the time of Cardinal Egidio Albornoz.

It supposedly derived its name from the Turris Stancam which in ancient times rose in the current Porta Romana, or perhaps from the so-called Contra Stagnum, according to tradition, as it was overlooking a “pond, or a pool upon which there was a drawbridge”. Its emblem is “a bridge, under which a pond lies, transformed later into three golden bars”; in the XVIIth century, it was allegedly visible in this second version in two places in the town. 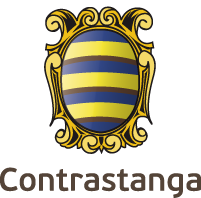 It would have derived its name from the Turris Stancam that once stood in the current Porta Romana, or perhaps from the contra stagnum so named, according to tradition, to be facing a “pond, or pond of water, which was levatoro bridge “. Its emblem is “a bridge, under which passes a pond of water, which then changed into three golden bars”; in this second version, it would still be visible, in the seventeenth century, in a couple of places in the city. 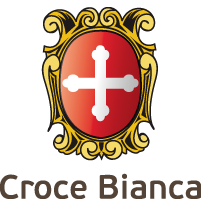 Both its name and its emblem allegedly came from an altar surmounted by a cross, that was called Staffo before and pulled down in 1861. It rose in front of the Church of Suffragio between Via Garibaldi and Via Umberto I. The emblem is a cross botonny on a red background. 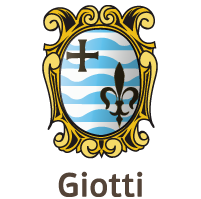 There are two interpretations about the origin of this name, even by Jabobilli, who supposed that it derived from a military settlement by the Goths but also, although this is a less reliable interpretation, by an area rich in taverns, inns and with a knacker’s yard where “ da Jotti si va per la carne, e vino” (people go to Jotti for the meat and the wine). There is no trace about arms. The current emblem, with a lily and a cross on a white and light-blue undulating background, was outlined in the XIXth century. 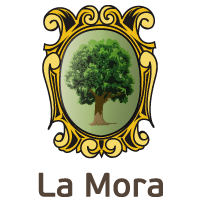 According to oral tradition, shared by Jacobilli, although with no historical data, this quarter allegedly changed its name and its emblem choosing a mulberry tree planted in its main square. In fact its emblem portrays a mulberry tree on a green background. 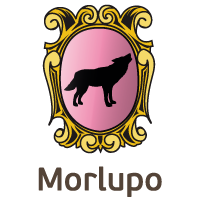 In the Middle Ages, as well as in the modern period, this was not a quarter, but a contrada inside the quarter Contrastanga. It was included among the Quarters, in the iconographic sources of the XIXth century, keeping its toponym. Its emblem clearly refers to its name and it portrays a wolf on a pink background. 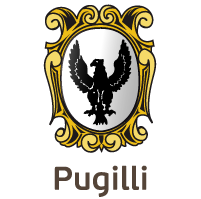 According to Jacobilli, the name of this quarter supposedly derived from the allocation of some pugilli (ancient square measure) of land to the refugees from Todi who settled in this area which was not included in the town walls before 1240. The current emblem was not mentioned by the seventeenth-century-historian as it was outlined in the XIXth century; the choice of the eagle, the symbol of Ghibelline Todi, can be considered in relation to the tradition concerning the origins of this Quarter. 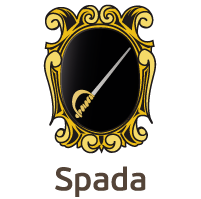 According to the tradition shared by Jacobilli, this name allegedly derived from the Spatarij, ancient people who settled in the area and built a gate along the town walls near the Church of San Giovanni dell’Acqua. On this gate, that was called Spataria, a drawn sword was supposedly carved, which is still visible, a weapon used by the Spatarij and later also by the inhabitants of the Quarter. The origin of its name probably was imaginative, with no documentary evidence; on the contrary, the identification of the weapon is quite reliable, as confirmed by a stone plate on which a sword was carved.