The Giostra della Quintana is definitely the most fascinating and difficult ring competition in Italy, for this reason it is also called the “Olimpiade” of equestrian competitions. During this event the knights are given particular names:

Il Gagliardo is the knight of Ammanniti

L’Ardito is the knight of Badia

Il Pertinace is the knight of Cassero

Il Fedele is the knight of Croce Bianca

Il Generoso is the knight of La Mora

Il Baldo is the knight of Morlupo

Il Moro is the knight of Pugilli

L’Audace is the knight of Spada

In order to win the competition and gain the Palio, the knights gallop around a figure-of-eight shaped track that is 754 metres long. The reproduction of the ancient wooden statue representing Mars and that is called Quintana is set exactly in the intersection between the two diagonals shaping the track. The rings hang from its right arm, from a hook placed under a clenched fist. The goal is to spear the three rings which progressively get smaller in the three successive rounds. In the first round the ring is 6 centimetres wide, in the second round it is 5,5 and in the third one only 5. The tournament is won by the knight who achieves the goal scoring the shortest time and with no penalties, gaining the Palio.

The knights of the Giostra della Quintana are able to raise spectacular emotions thanks to their competition. They are young, skilled, competent, resolute and represent the lords of the jousting tournament and of the rings. In June and in September it is possible to see them while they are competing in the Campo de li Giochi, around the marvellous track. 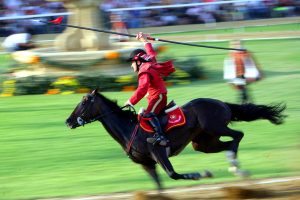 The statue is the symbol of the Giostra della Quintana in Foligno. It is known as Quintanone and represents Mars, placed in the centre of the Campo de li Giochi, in the intersection between the two diagonals, with its outstretched arm and the rings ready to be speared by the knights in the tournament. In ancient times, Mars was exhibited every year in the Square, during the Carnival, from January 17th (Anthony the Great’s Day) until Shrove Tuesday, the end of the Carnival. The walnut statue is entirely painted in many colours. Information on its original shape could be found in the flourishing workshop of a carver, of a cabinet-maker or of a plasterer in Foligno. 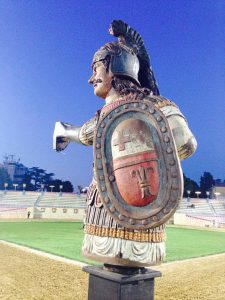